My friends, Jax is home with his family in Honolulu. Finally. I really honestly thought I would never be making this post. He came to stay with us in August and was supposed to be with his family by Christmas. So he made it, just almost 4 months late! 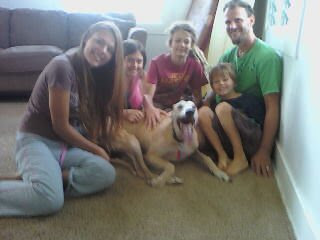 I must say, if anyone is flying a pet anywhere, I would highly recommend Continental Airlines. They have been so helpful during this whole process. The man at the Quikpak cargo desk at Chicago was so nice. He helped me get the kennel out of the van and into the terminal. He was so nice when I was standing there blubbering like a fool too. Gave me his direct number to his desk so I could call and make sure the plane got off. He told me he would keep Jax with him in the office until the last possible minute. When I did call back, he gave me all the details about how he behaved in his kennel while he was there with him. Reassured me that they do this everyday and that he was in good hands. Super, super nice guy. Also told me that the other airlines that I got quotes from (like $2,000) would turn around and fly him with them anyway. I was able to track him. See what time he was put on the plane, what time he got to the next stop, when he went on the next plane. Also, when he got to Honolulu, they told me when he went to animal quarantine. The only thing that would have been better,was streaming live video!

So after all of you who have followed this story, thanks for your support.
Posted by Mad Red Hare at 5:27 PM