Meet Eileen, racing name CRT Eileen.  Arriving this past Saturday January 16th after her whirlwind five state tour, she is now getting acclimated to the frozen tundra that is Indiana. 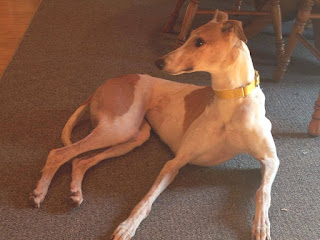 Eileen is a tiny little peanut of a girl and surprisingly weighs about 58 pounds.  This girl is super sweet (arent' they all) and has a curly tail, which I have not been able to catch on camera. 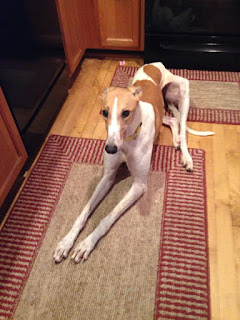 Eileen is settling in well and enjoying retirement.  She's a good eater, doing a great job on the stairs and learning to live with the resident cat.  Welcome foster number 30!

***Edited to add the Miss Eileen went to a potential home on February 11, 2016.  They fell for this sweet girl and her adoption was finalized.
Posted by Mad Red Hare at 4:01 AM 2 comments:

While preparing for my foster who is scheduled to arrive this weekend, I was reviewing the names in my notebook.  In 2015 three of my former fosters passed away.  If they are with me 12 days or 12 months, they still take a piece of my heart when they pass.

Wacky Patti, my sweet shy foster girl.  She passed away in July 2015.  She moved about an hour away, but I always got to see her at our Greyt Fest and Christmas parties.  In April her family was going on vacationm so the person who was caring for her was going to meet here to pick her up.  I am so glad that I got to see her again before she passed.  She had a wonky ear and that bunny-soft fur.  Patti made it to the age of 13. 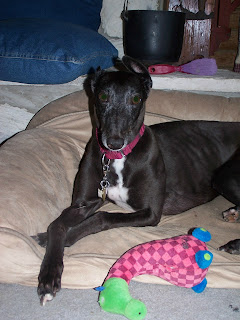 Ulrick.  I always referred to him as the Eeyore of greyhounds.  He was the sweetest boy, but always had kind of a forlorn look on his face.  In the fall of 2014 he suffered some type of neurologic event that left him unable to walk for several weeks.  It took a while, but he was able to walk again and recovered well.  A little remnant of his episode was the cutest little gimp and slight head tilt that made him even more adorable.  The vets weren't sure what took Ulrick from us, but at 9 years of age, he was way too young. 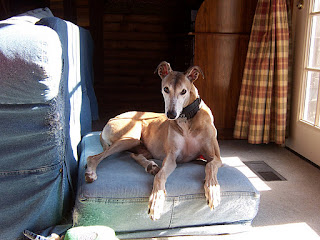 Peyton, formerly known as Beagle Buddy.  This one folks ripped my heart in two.  Buddy, who will always be my Buddy Boy, was here for almost a year as a foster.  Even though he moved a couple of hours away, I was lucky enough to get to see him several times a year.  I never had to speak a word to him, he always knew I was there.  Now don't get me wrong, he adored his momma, but he and I had a special bond.  He would come to me and then look to his mom like he was asking for her approval to come see me.  Making his passing even harder was the fact that his mom passed away a few months before his diagnosis of osteo.  I will never forget the message I received on July 3rd telling me he had bone cancer.  I broke down and sobbed.  So unfair.  His dad chose to keep him comfortable and when he could no longer do that, he set him free.  He passed away on August 31, 2015 at the age of 9. 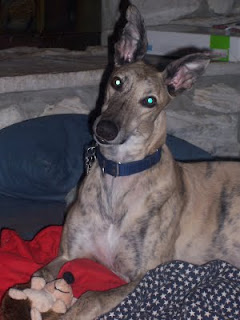 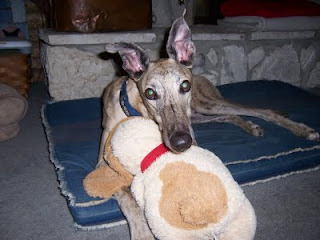 Fly free my sweet angels until we meet again. 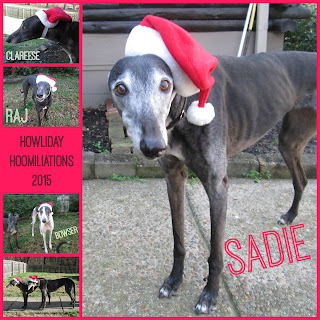 It was September 11, 2015 and the night before our annual Greyt Fest that foster Raj arrived.  The gals from GPA Emerald Coast were vending at our event, so Raj hitched a ride with them.  Note to self:  Don't agree to get a new foster the night before a big event that you are working.

Raj has been a total joy.  As with our previous foster Starfire, Raj had a decent racing career and was 4 1/2 when he ran his last race in May.  Something I noticed with these last two boys, they have been two of the easiest fosters I've ever had!

Raj posing for the camera shortly after he arrived in Indiana. 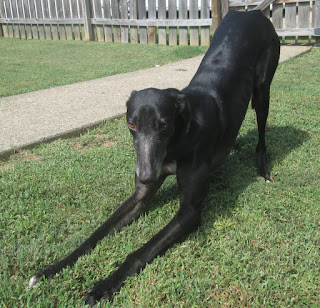 Some of Raj's endearing traits, he loves to try to climb in your lap!  This is great, except those darn elbows of his are killer!  He climbs up and lays his head on your shoulder.  He's also got those eyes that just melt you.  He also was a lead roo-er.  I've never had a greyhound that loved to roo.  He had everyone hear going.  Well except Sadie, only dogs roo and she certainly isn't a dog.  It was getting harder and harder to think of him leaving again.

Back in October, Raj went to a home as a foster with intent to adopt.  It didn't quite work out, so he came back here.  Shortly before Christmas I heard that Raj had someone that was interested in him.  I was super excited as his birthday was December 29th.  Could I do it again?  Get my foster adopted for his birthday?  Well, Raj went to Louisville on the 27th and I just found out that she is keeping him!  This will be his perfect home. 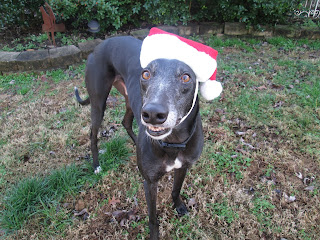 I don't know if it's my age or what, but these past two fosters have been killer to let go.  I was actually starting to try to figure out how we could have four dogs permanently.
Posted by Mad Red Hare at 5:13 PM 1 comment: