I can't believe it's November already!  I am so far behind, and I realized I hadn't let you all know about Clareese!

Clareese came to Indiana on Saturday, October 5th.  I was a little hesitant about taking a foster at this time as I was leaving for Dewey on the following Tuesday.  This would only give her 3 days to get settled in before I left.  I was trying to make things easier for my family as Sadie was going along with me, but then I was worried about Bowser being by himself.  Hubs said that he needed some company and since Clareese is also Bowser's litter mate, I figured it would be no big deal.  The fact that I have always had a thing about finding one of my dogs litter mates some day, made the decision to bring her here even easier. 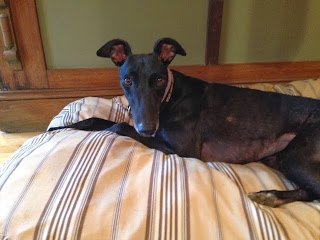 She's a tiny little thing, even shorter than Sadie.  She is now up to 57 pounds and her coat is starting to get a little bit of shine to it.  She follows me everywhere and is a good girl.  I was hoping for one of those pair of litter mates that would be inseparable, but these guys aren't like that.  They like each other and play like puppies, a little rough for me sometimes.  Muzzles are always a good thing when they are out in the yard together because the two of them can run super fast! 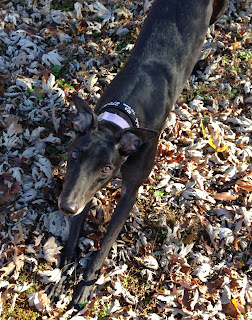 I snapped this picture of her in the back yard when she followed me to the shed.  She was actually doing a little play bow.  She a cute little bugger and I hope she finds a forever home pretty soon!
Posted by Mad Red Hare at 4:19 PM 8 comments: