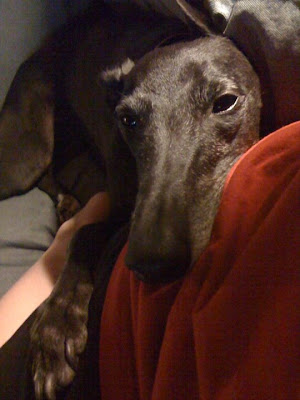 On August 21, we got a new foster pup. Meet Annie. She makes number 16 for us. Fosters, that is. Annie, Annie-bananie, Annie-Mae, Little Bits & Pieces. Those are just a few of her pet names. She just turned 3 in February and weighs in at 54 pounds. A little bitty thing. She developed seizures a couple of months ago. Since being on her med though, she has never had another one. This picture is of her cuddling with my daughter, Megan.

Buddy went to a different foster home and they may even keep him. Now, don't get me wrong, I loved the Bud-ster. But I was having such a hard time making the decision to keep him, that I think it just wasn't meant to be. Well, for now anyway. If he comes back though, he most likely will never leave again!
Posted by Mad Red Hare at 6:49 PM 7 comments: 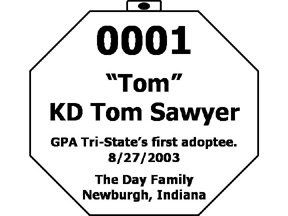 Eight years ago today, we signed the papers to make KD Tom Sawyer officially ours. Not only is he a special boy to us, he was also our group's first adoptee. The image above is a spot that I sponsored on the back of one our Greytfest t-shirts a couple of years ago.

It has been so rewarding to watch this dog blossom. I believe he would have been considered a "spook" by most standards. But with patience and love, he has grown to love and trust. Happy Gotcha Day Tommie Boy, love you bunches! 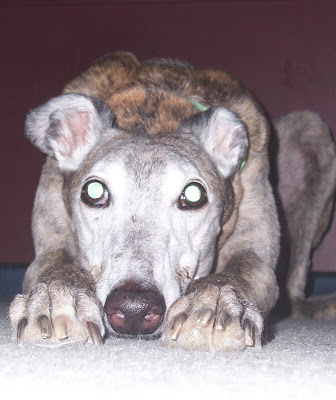 Thanks for all your positive thoughts for Tom. After 24 hours on the Rimadyl, he was much improved. We will continue this for another week (maybe less). He is feeling good again and was even barking for his supper tonight!

On another note, my foster Buddy left to go to a different foster home. We had to switch dogs around this weekend to find out if one of our hounds would be good as an only dog. The family that currently has Buddy has had their eye on him for a while now. It would be a wonderful home for him. I do miss him though. I have told the family, if he comes back again, he most likely will not leave!

Thinking of You Dixie

Thinking of my sweet Dixie girl today. This would have been her 11th birthday. Snapped this photo of her last fall in her favorite place, her backyard. 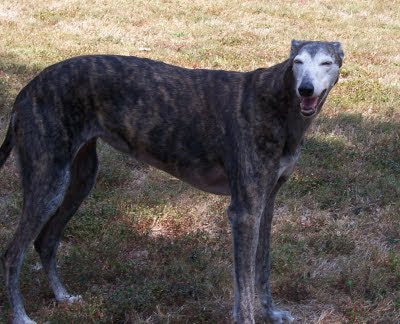 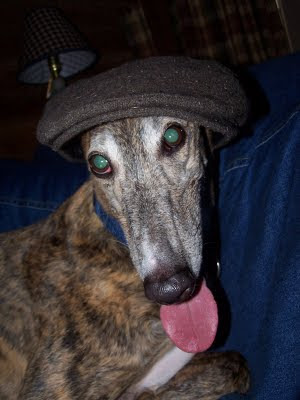 Okay, deep breath...yesterday Tom had, what I am referring to "an episode". He started to go downstairs and I was in front of him. He wasn't coming, so I looked up to see him frozen at the top of the landing. He was sticking his left front leg out and had the look of sheer panic in his eyes. Suddenly, I had the sick feeling in the pit of my stomach.

Finally got him back up from the landing. He was walking funny. Not necessarily limping. I refer to it as "high stepping". Almost like a cat when they have something stuck on the bottom of their paw. Then I noticed he was stumbling too.

Our house looks like a single story from the front, but on the back side it is two stories. So, to get to the backyard, you need to able to maneuver the stairs. Found the leash and took him out to the front yard to potty. He promptly walks to the sidewalk and just starts going. No squatting or hiking his leg. He just pees. Now, that doesn't sound good. For the rest of the day, we did no stairs, just going out on the leash.

He continued to have these episodes off and on during the day. I debated about taking him to the vet, but then he would get better. He was still kind of unsteady on his feet by evening and I decided he would go to the vet in the morning. Needless to say, not much sleep here for me.


We go to the vet, and it was crazy there. I guess everyone was going today since it was Friday. I see one of the older vets in the practice and explain what is happening. He says right off the bat, "I don't like this one bit". Then he calls one of the younger lady vets in for her opinion. She gives him the once over too.


Tom has kidney disease and had a horrible experience with anesthesia last time. We discussed sending him to Louisville for further testing. After much discussion, we decided to just treat the symptoms and give him the best quality of life that we can.


I know it will be a hard decision to make when the time comes, but I will not allow him to suffer. He deserves so much more than that. He has blossomed into such a loving, goofy boy and I hope to have lots more time with him. 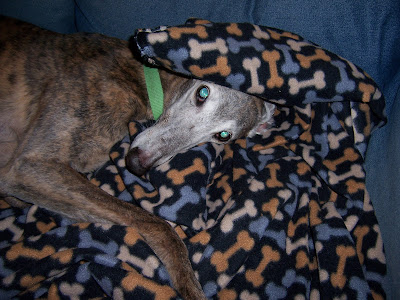 One of my daily rituals is reading my favorite blogs. I call it "my window on the world". Today, I was reading one of my favorite blogs, Tales and Tails, and was challenged to tell my story about how we picked out our first greyhound.

It just doesn't seem like it's possible that 8 years have gone by. This month on the 27th, we will celebrate our 8th gotcha day. My girls and I chose this adorable brindle boy named Tom Sawyer. A shy boy that was cat safe. That sounds perfect!

At that time we had an adoption rep in our area for GPA Indy since our chapter, GPA Tri-State, was just being formed. The timing was right and Tom was going to be the very first adoptee for this new chapter! After the application process was completed, we went to Lafayette, Indiana to pick up Mr. Tom.

Shy was one of the features we liked about this boy. When we went to the kennel to pick him up, we found out that shy didn't even come close to describing him. He wouldn't even come outside of his run to look at us. Finally, after no luck, we went inside to meet him. He ran around the room and wanted nothing to do with us. His owner was able to get a hold of him and bring him to me so I could pet him. My mind was made up, he was coming back with us. After all, the girls had picked him out.

Tom had been living in the kennel since it was deemed that he was not a good candidate for racing. He ran his 3 races and just didn't cut it. Lucky for him, his owner/breeder takes all of his dogs back to his kennel until they are adopted. For Tom, that was 18 months.
After a couple of weeks at his foster home, Tom was getting used to life on the inside. When he came to our house for the first night, he spent 16 hours in his kennel. Not by my choice, we left the door open. He was just so scared of everything. It broke my heart. We finally got him out by literally lifting the back of the kennel up so he kind of slid out.
Little by little, he made small strides. He started out spending most of his days at the bottom of the stairs. Within the week, he moved up to the landing. Then he made it into the living room. Slowly, but surely, he was gaining trust in us. It didn't take long though for us to decide that we needed to add the second dog. Along came my Dixie girl and she helped Tom blossom into the goofy boy he is today. 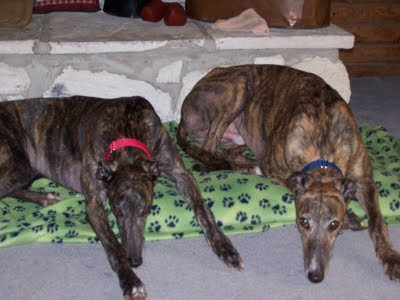 This picture was taken right after Dixie came home. Not only are we celebrating Tom's 8th anniversary of becoming a family member, the 21st would have been Dixie's 11th birthday.

So, there's a little bit of our story. Hope you enjoyed it. 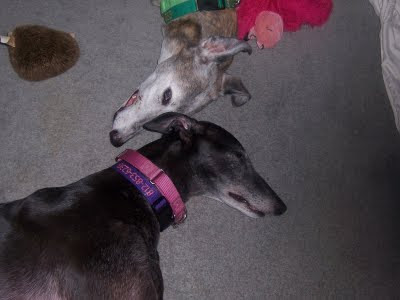 Tom and Sadie are taking a break from heat. It is so hot here in Southern Indiana! You might as well give up watering your plants, cause they are dying even if you do. The dogs run out to potty and come right back in and pass out.

We had a little house guest over the weekend. Her name was Annie and her foster mom went out of town for the weekend. I didn't get any photos of her, but she is Sadie's twin. Sadie seemed to like her okay, but it was really too hot to play outside. At one point, they were laying on the dog bed together. Maybe Sadie liked her because she went home after 2 days!
Posted by Mad Red Hare at 7:22 PM 1 comment: