On February 18. 2014 I was reflecting on my boy Tom.  It had been one year since he left me.  Out of the blue, I got a facebook message from a friend asking if I was home, she needed to talk to me.  When I answered the phone, she said she had a surprise for me.  This opportunity was for someone who she thought was special to her and asked if I was interested in naming a racing pup.  I fought back the tears and had this huge lump in my throat.  I said I would be honored.

So the waiting game began.  On July 4, 2014 I received an email with the subject line "naming the greyhounds...hope you are in town".    The content of the message was this "Black female..16 letter or spaces.  First choice,2nd and 3rd. If you use greyhound data check to insure the names have not been used in the last 10 years.Call me with any questions..need ASAP."

I was frantic, how would I ever decide on a name?  And to come up with three choices.  Plus I would need to choose a call name.  I called on a few facebook friends to help me brainstorm on this project.  Most important in this decision, the name would somehow honor my Tom since I received the call on the anniversary of his passing.

First thing that popped into my head, licorice.  Wow, how original was that?  Did a little research and came up with anise, which some manufacturers add to candy to give it a licorice-like flavor.  Second in my thinking was Tom's legacy.  Thirdly, I remembered how Tom loved his lady-dog friends.  So after much trial and error I came up with the following:

About two months passed when I received the email wanting my address so I could receive a copy of the NGA sheet and that my first choice of name was chosen.  The NGA sheet was the next best thing to an actual photograph.  It showed her white spots and I at least had a visual in my head of what Star looked like.  Shortly after that, I checked greyhound data, and there she was!

The next step to follow her racing career was to check out track info.  There I registered for an account so I could set up a virtual kennel.  I found the names of the other litter mates and placed their names in my virtual kennel.  Once you place a dog's name in your virtual kennel, you will receive e-mail notifications of upcoming races.  You will also receive an email telling you the results of the races.

December 5, 2014 I received that email saying "The following greyhounds from your watchlist are entered in races: Tom's Anise Star, Naples, 12/05/2014, T, race 2, post #7."  Oh my gosh, her first official race.  I was nervous and excited.  I couldn't watch, how could I?  What if she stumbled?  Fell?  I have only seen one other race in my life and it was from the gift shop at Ebro.  After I find out the race is over and she finished, then I could watch the replay.

Through the power of Facebook, I was able to connect with Vera Rasnake.  Her partner runs the Oxbow-Trow kennel which Star races for.  She sends me pictures and updates from time to time.  She also sent me a racing program from a race which she won. 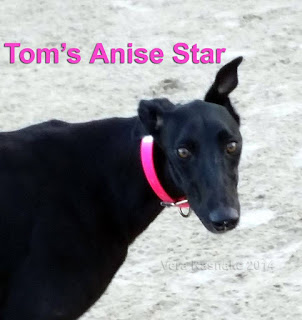 This tail is something else.  When you watch the replays, sometimes it's up there in the air like a rudder! 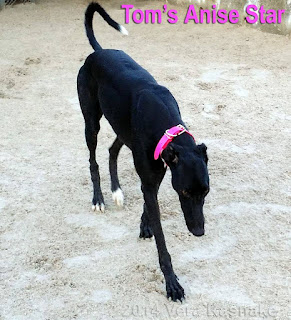 I am enjoying following this girl and her career.  It's been a learning experience figuring all this racing stuff out.  The one thing I have learned is that there are some awful nice folks in the racing industry.  They are responsible for bringing us the awesome pets we have when they retire to our couches.

Today is Star's second birthday and she is racing in the 12th race at Flagler this afternoon.  I sent a special treat for her and I'm looking forward to getting a picture of the birthday girl.  Fast and safe sweetheart!
Posted by Mad Red Hare at 9:25 AM 2 comments:

VJ Starfire arrived here at Lazy Day's Greys on February 7, 2015. It had been a while since I had a dog straight from the track.  The first night was a bit rocky, but once the sun came up, it's like someone flipped a switch and he's been the perfect dog ever since. 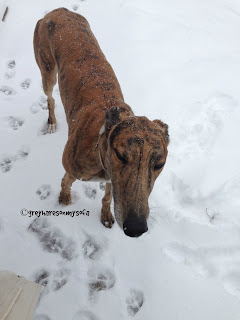 Off and on I over the next few weeks, I would hear someone yelp from time to time.  With four dogs in the house, I was having trouble figuring out who it was.  One afternoon, I was sitting in my chair enjoying my favorite pass time of watching dogs sleep, when I saw Starfire try to get up and he yelped.  At first I thought it was static electricity from moving around on the dog bed.  But upon further observation, it seemed to be his neck.  Then I noticed the yelping more and more.  He would yelp from time to time when getting up from a laying position, playing with a stuffie or if someone would bump into him.

A vet appointment was scheduled with the vet that handles the group's foster dogs and x-rays made.  It appeared he was having some issues with the discs in his neck, but would need further tests to confirm this.  In the mean time he was on anti-inflamatories and seemed to be doing a little bit better.  Of course, until we could pinpoint the problem, he was on medical hold for adoption purposes.  This truly broke my heart as this is the sweetest boy ever. 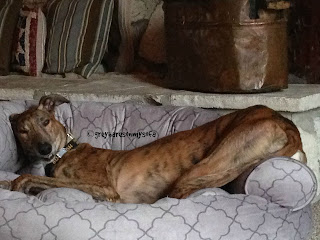 The first trip to Louisville to the specialty clinic there was to determine what the plan would be.  After the doctor reviewed his x-rays and did a physical exam, it was decided that he would need a myelogram, ct scan and possibly a MRI to properly diagnose his issue.  We were leaving to go out of town the next day, so it was decided to wait and do the testing when we returned.  Evidently with a myelogram, they like to keep them at the clinic for a few hours to make sure there is no reaction to the dye that they use.  We made the appointment for Starfire for a couple of weeks later and were to keep him quiet, use a harness and continue with this meds.  It was also made clear that if this was a disc issue, he would need surgery.

The morning of his appointment, I packed up his food (enough for several days), his meds and a blanket for him.  We were fully expecting to be leaving him for surgery as he was still having issues from time to time.  We just needed to get this boy better.  So the president of the group and I drop him off and hang around Louisville to play the waiting game.  But instead of getting a call that he was heading to surgery, we get the call to come back to consult with the doctor.  We were both nervous.

Doc showed us the imaging from the myelogram and ct scan.  He said the discs were okay, but needed to get a confirmation from the radiologist.  It seems that whatever the particular problem was, it was just an abnormality for Starfire.  There was definitely something there, but it wasn't a tumor.  That was ruled out by the radiologist.  So, while we really don't have an exact answer, we know that he is better.  Since his testing was done, he's been fine, knock on wood.  I can say that I have heard him yelp twice.  He is currently on tramadol, as needed when he exhibits pain.  It is the weirdest thing.

This boy is the best boy though.  He will be 5 years old on August 21st.  Loves everyone, but really adores children.  He raced 127 races and his last race was on September 21, 2014.  I was very lucky to be able to connect with the lady who worked with him at Pensacola.  I asked her if there was anything special I needed to know about Starfire.  Her response, guard your heart, because he will take it with you when he goes.  Boy, is that the truth.  But, my hope for him is a forever home for his birthday. 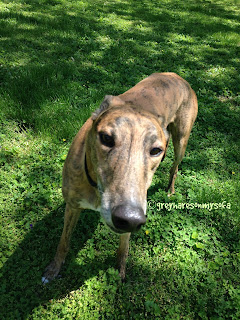 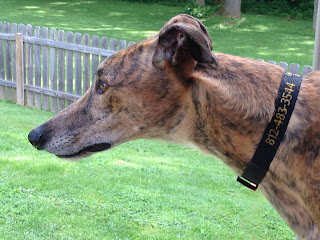