Tom made it through surgery just fine.  Well, minus 12 teeth.  I was actually expecting him to lose more, but am thankful he didn't.  My vet did the e-mail consult with OSU and received great info on anesthesia and pain meds.  Tom also received a couple of xanax before we left as well as entered the vet's office by a different door.  We tried so many things to cut down on his anxiety level and I think the combo worked.  His temp was the highest right after we arrived and never got any higher.  He was under anesthesia for 3 1/2 hours.  Poor guy.

They wanted me to come get him around 3:00 p.m.  This is earlier than they usually release dogs from dentals, but again, didn't want him staying there stressing again.  So they carry him out to the car.  I am on the way home in a panic thinking who is going to help me get him in the house.  They told me he could walk, but was still shaky and weak.  After trying everyone I knew, I had to ask my husband to come home from work.  So he is passed out in the back of the van and as soon as he hears the tires hit the gravel of the driveway, he is up and ready to get out!  I couldn't believe it.  He walked around the yard, did a big pee and came up the 3 steps to the house.  Once inside, he put on the brakes.  Not sure why.  I finally coaxed him to his dog bed and he crashed there for over 4 hours.

My biggest problem was getting the first dose of pain meds on board.  I mean, how do you pill a dog who can't eat any foods yet and just lost 12 teeth?  Well the first attempt was a mess.  However, I put a plea out on facebook and got a bunch of good ideas.  Here is what I came up with.  Take a slice of Oscar Mayer thin sliced ham, smear a bit of peanut butter to hold the pill on.  Then wrap the ham around the pill.  He took it!  Although he figures things out pretty quicky, I hope he doesn't catch on to this because we have a bunch of pills to take. 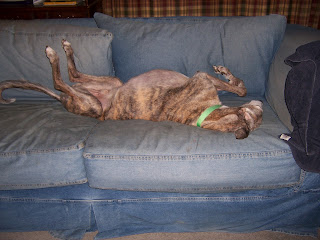 This morning I made him a canned dog food smoothie with his regular meds in it.  Yuck.  This picture is Tom's first roach since he's been home.  All in all, I think things are going well.  He is very swollen in his face, still a pink tinge to the water after he drinks and sometimes a little pink from his nose.  But I think we are making improvements.  The vet said the degree of disease in his mouth was pretty substantial.  I hate that.  I have beat myself up since she told me this.  I am so glad we were able to figure out a good anesthesia and drug protocol for him so we can get these teeth under control.  I hope he feels better soon.  Plus, I need some sleep!
Posted by Mad Red Hare at 6:40 AM 11 comments:

Heck, I'm going to skip a title for this post.  I typed in about 10 things and can't come up with one.  I went back to try to find the post about Tom's surgery last May.  Of course, Blogger can't leave anything alone, and I can't find it.

Anyway, last May we attempted a dental for Tom.  He had some complications and his temp spiked to 106.  They got the bad teeth out, but really couldn't finish the dental or remove the growths that needed taking off.  His teeth have gotten horrible in the mean time.  He now has a root exposed where the gum has receeded so badly.

We had pre-op bloodwork and the kidneys are looking pretty good.  Some of you may not know that Tom also had kidney disease.  So I am asking for everyone I know to be praying or thinking of Tom on Tuesday morning.

We are inclined to think his temp spike the last time was related to stress.  He doesn't do well on car rides or trips to the vet.  He is always excited to go, but just is a nervous wreck.  When they took him in the back to draw blood and do his nails, the vet decided to try something.  She took his temp before they started and it was 103.  By the time they had drawn the blood and done his nails, it was already 104.  So, we are giving him a sedative at home and they will be ready and waiting for him when we get there. 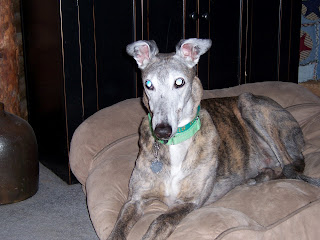 I am a nervous wreck. So please, send us some positive thoughts, prayers, whatever you got!
Posted by Mad Red Hare at 12:07 PM 7 comments: