There is a tradition here at Lazy Day's Greys Chalet.  Every hound here on Christmas day must have their picture made with the Santa hat.  Some are definitely more cooperative than others!
Before I get to the hat pictures, this first picture is of Clareese, Bowser's littermate.  She was standing in front of the tree looking out the window.  When I took this picture I thought she may be thinking she was watching for her forever family.  She's had several inquiries, one home visit, but no takers so far.  She is very sweet, a real cuddler too.  She's not so fond of my 2 year old grand son though.  Clareese isn't growly with him, I think it is his constant motion that makes her nervous.  Heck, some days it makes me nervous! 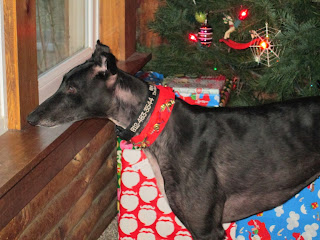 First up Miss Felicia!  This is Felicia's third Christmas with us.  She stays with us while her family travels to visit family.  I was kind of bummed when earlier this fall her mom told me they weren't going away this Christmas.  But then about three weeks ago she asked if we could keep Felicia during the holidays.  It took me about a split second to answer with a "yes".  Love this girlie like she was my own.  She has blossomed into the sweetest girl.  She and Sadie are both 10 years old now. 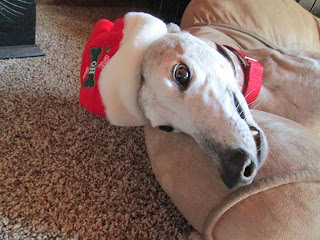 Next up is Clareese.  She was less than excited about wearing the hat.  Really, all she wanted to do was eat the pom pom on the hat.  This girl loves her stuffies and anything that even resembles a stuffed animal is fair game to her.  Blankets, dog beds, cat beds, gloves, slippers, etc. 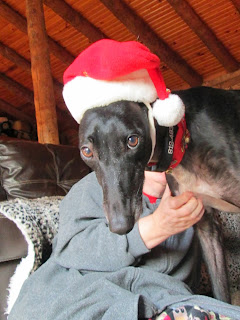 Sadie was the least excited of the bunch.  I couldn't even get her off of the couch to participate.  I found the other hat and kind of draped it over her head.  We must not disturb the princess! 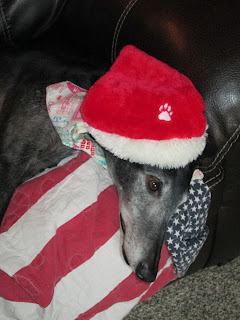 Last, but not least, Bowser.  He was not being very cooperative either.  Finally he laid down and I got a decent picture.  This guy is a character most of the time.  So goofy and definitely not the brightest crayon in the box! 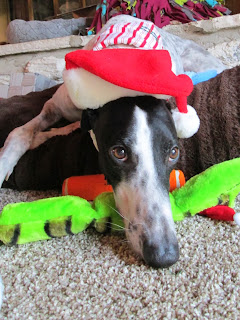 Merry Christmas from our hounds to yours!  The annual Santa hat photos will be taken tomorrow! 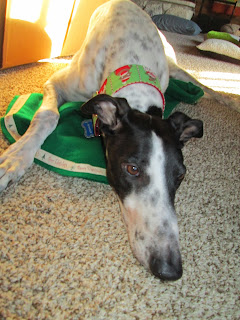