Have A Greyt Day! 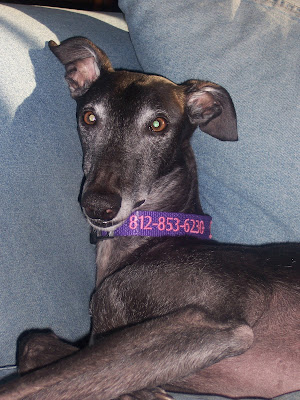 Sadie is in her favorite spot. The couch, of course! My furniture has kind of seen better days and I would love to have something new. I am thinking about leather. Any of you out there have leather? And cats???
Posted by Mad Red Hare at 6:45 AM 3 comments:

Look at that face! Who couldn't love that? Well, evidently several families. You ever have a dog that has touched you in a special way? I think they all do, but this guy is special. He had been returned not just once, not twice, but three times! The first and second time were legitimate. Well, as much as they can be. His owner was single and had been diagnosed with stage 4 breast cancer. She just couldn't care for him. The second time, the dad in the family became ill and los this job. They had children to raise, so they opted to give up Bluto. They were devastated. But the third time, ugh, they just didn't have time for him.
Bluto had been at my house many times during his life with the third family. I dog sat for him while they were away on vacations and one time when we had a horrible ice storm and most of us were without power. So when they said, come get him, now...he came to my house. I wanted to keep him so bad, but it just wasn't in the cards. He developed a problem where his toes kept dislocating. After much consideration, we just fostered him for a while. Bluto got adopted and is now living with a lady and he is the center of all of her attention.
Buddy and I will be attending a meet & greet in Owensboro this Saturday and I jokingly said I would love to see him. Well, low and behold, the person running the greet has him at her house!!! WHAT? I must put my hands on this boy and give him some lovin'. His new owner broke her wrist, so he is on vacation at a friend's house. To say this is the highlight of my week would be an understatement. I absolutely cannot wait to see him. To see if he remembers me. I know I will probably be a blubbering mess, but look out Bluto, here I come!!!
Posted by Mad Red Hare at 8:52 PM 6 comments: