Sunday was a special day here.  My foster, Hannah, turned 10 years old.  She is a super sweet girl and even though she doesn't have her own family yet, I wanted to do something special for her.  When I put the community birthday hat on her, she freaked out.  I finally was able to lay it gently on her head and snap this picture. 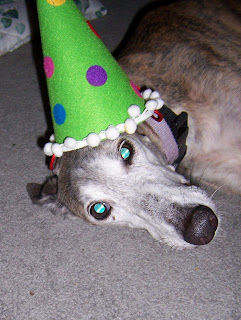 My daughter and I were in Indianapolis for a family baby shower and we decided to find a dog bakery.  She got on her i-phone and found a place on the southside.  We get there and they are closed.  That city has grown by leaps and bounds since we moved away 25 years ago, so I thought maybe they would have a Three Dog Bakery by now. They do!  Off we went on an adventure.  So many choices, but I decided on the cupcakes.  I bought 4 because Miss Felicia was staying with us too.  But her momma had already picked her up before we got home.  I would love to open a store like this someday! 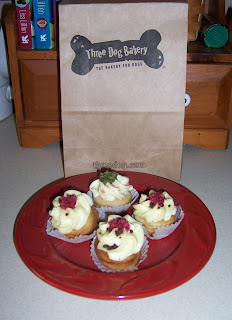 Hannah, the birthday girl looks like she is saying "give me my treat!" 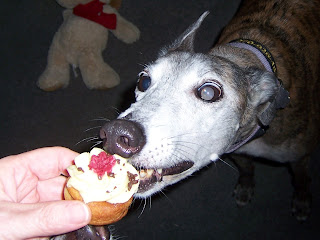 Tom very gently took his cupcake from me.  Such a sweet boy. 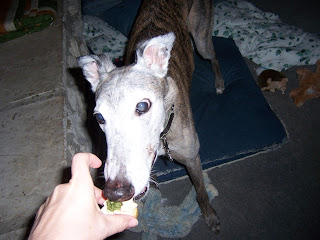 Sadie couldn't be bothered by getting up from her bed to get her treat.  Sheesh, what a life! 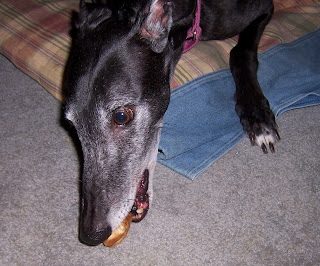 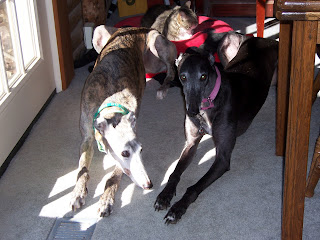 This past month or so has been a rollercoaster ride for sure.  I put a lot of energy preparing for Tom's dental and then helping him recover.  Then last Wednesday, Tom was having problems with his rear end parts.  He was laying there and kept flicking his right rear leg.  Then it progressed to him chewing on the leg.  Then when he tried to stand up, he was staggering, his legs were shaking and then started giving out on him.  Off to the vet I go.  By the time we got there, he was already improving.  The vet really couldn't get a response from him during her exam.  Of course, being so close to when he had his dental, we really didn't want to sedate him again.  So we opted for medication.  Tom started taking 100 mg. of gabapentin 3 times a day.  The next day he was still very shaky, but a bit improved.  We added half of a tablet of rimadyl 2 times a day for a few days. With his kidney issues, we decided to quit that since he improved.  He has held steady, so let's hope this works for him.

Next up Sadie.  Sadie is a crazy fool.  She runs everywhere.  After a run in the yard a couple of weeks ago, it appeared that she had an intermittent limp.  I was watching constantly.  Is she limping, isn't she limping.  We all know what the greyhound limp can mean.  I was sick.  Couldn't sleep.  Finally, I decided to go to the vet.  Of course, with a wing named after me, they love me there.  They examined Sadie.  Just one little spot that they could get a little reaction out of.  Of course, they know me, and knew I would want an x-ray.  Being the smart woman that I am, of course, I withheld food before we went.  I knew that getting an x-ray would be the only way I would ever sleep again.  I picked up Miss Sadie and went to Sonic.  I was a little concerned that she didn't want her burger.  She was a little stiff and sore from the vet visit.  When the vet called me she said x-ray looked clear, but we need to have it read by the radiologist to be sure.  Of course, we do.  They just called and said there were no changes or suspicious areas on the x-ray.  So I think we are in the clear. Perhaps it is a soft tissue injury or an old racing injury.  Sadie was a pretty good little racer.  So for now, all is good in my world.

P.S. 3:30 This afternoon, I noticed Tom licking his foot.  Look and his toes are all stuck together.  Get it cleaned up and it is red and raw and oozing.  Now, he just had his nails done yesterday morning.  How the hell does this happen?  Since I am leaving town in the morning, I decided I better take him in.  Good thing I did, because it was already showing signs of infection.  Back on anti-biotics, flush twice dailly and follow up with medicated ointment.  Is this week over yet?

Where did the month go?


I just noticed it's been almost a month since my last post.  Where does time go?  I had an additional foster for a couple of weeks.  Her name was Beach, but her family decided to call her Ivy.  They actually adopted two girls.  The other is now named Willow.  Ivy just turned 2 while she was here and Willow is 3.  I must say this was a challenge.  Beach/Ivy was fresh from the track.  A first for me.  She was becoming quite the cuddle bug.  But I forgot how much energy a 2 year old has. 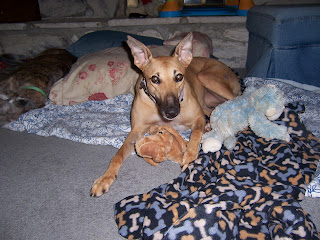 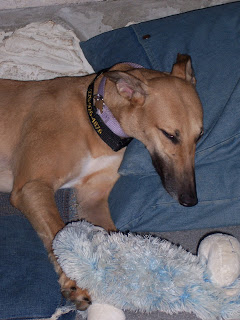 Don't let that innocent face fool you. She is an excellent stuffy destroyer. 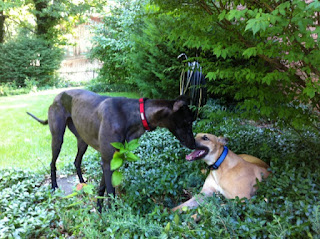 Willow and Ivy in their new home.

Tom has recovered from his dental.  Now he is having some issues with his back end.  That's another post though.  Please send prayers or positive thoughts our way for my boy.
Posted by Mad Red Hare at 10:51 AM 6 comments: