After 26 fosters, I knew it would happen sooner or later.  I learned that one of my fosters has passed away. 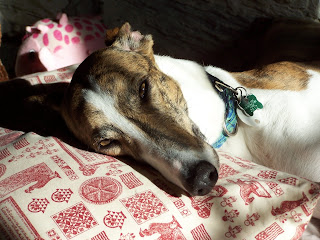 KC Wired 'n Wild.  She was the cutest little white and brindle girl.  Tiny thing with an overbite.  It was December and we were waiting on the hauler to come from Florida with a load of dogs.  The president of our group had recently picked up KC and I would be taking her home to foster her.  She had been adopted at the track kennel when the family was in Florida on vacation.  They were having trouble with her and didn't know what to do.  So they contacted our group to surrender her.  While any adoption is good, I so appreciate the support and advice that I get from my group. 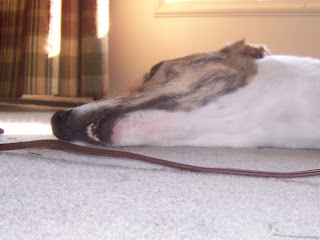 KC spent several months at my house.  After I was still having issues with house training, it was decided she would be a good candidate for the Second Chance At Life Prison Program at the Branchville Correctional Facility.  Awesome, awesome program.  I was so lucky to get to be one of the volunteers to work with this program when our group provided them with dogs.  Watching the offenders with the dogs was amazing.  To see the dogs and men blossom with confidence was so rewarding.  I know that this program is a win-win for all involved. 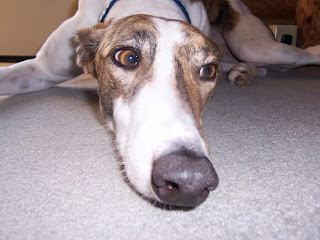 After KC graduated from SCAL, she was adopted about 20 minutes from me.  Like most fosters, I only got to see her one other time at our Greyt Fest.  Her new home had another girl greyhound and her momma spoiled her rotten.  Three years ago, we had heard the owner had lost one of her girls.  However, e-mails went unanswered and we never got clarification on which dog had passed.  I found out Saturday that the owner had lost her other greyhound and we finally were able to piece together the puzzle.  KC actually was the first one to pass.  She had let the girls out to potty and when she went to the door, she saw her laying in the yard.  She called her and she didn't respond.  She went out to the yard and discovered her deceased.  Apparently she just dropped dead.  My poor baby foster girl was only  6 years old. 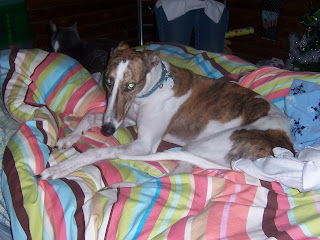 While it has been 3 years since she passed, I am just now able to grieve for her.  KC was with us for only a short time, but I will remember her forever.  Run free baby girl.

You've heard of cotton-eyed Joe, this is cottonwood Bill.  I have a strong dislike for that tree.  When Bill followed me out on the deck the other day it was blowing around, so I scooped up a handful and decided to get creative. 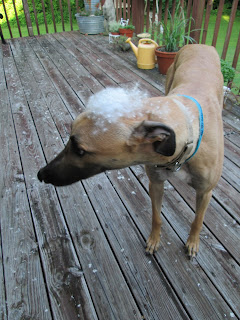 Do you think this makes a good toupee for Bill? 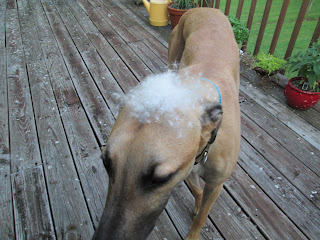 I am hoping this 40 foot tree comes down soon.  This is just a small sampling of its fluff. 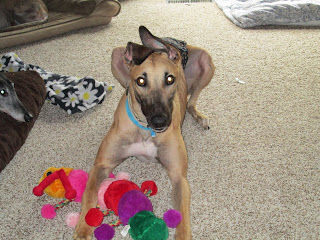 The foster home that Bill was in, wasn't really working for him.  We were supposed to trade Bowser for Bill.  Hubs decided he didn't want to "upset" Bowser by moving him around.  Why don't we just take a second foster?  Okay, sure, what's one more? 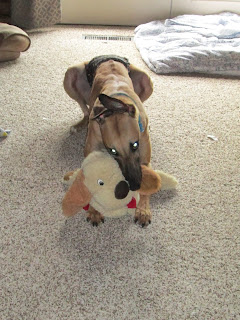 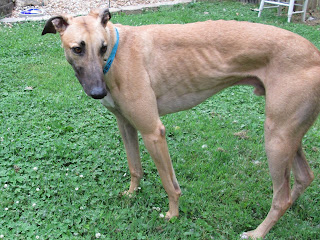 Bill turned 2 in January.  You can tell he is still newly off the racing scene.  The dog is ripped!