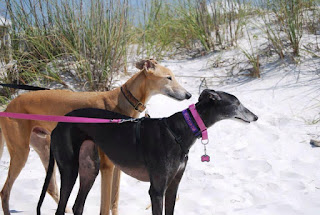 I keep putting off posting this, my fur-nephew Boris, passed away on December 27th.   He was my Sadie's travel partner for Howlidays.  Sadie is the black girl in the picture.  My Boris was a beautiful fawn boy.   He was also my sister's first attempt at fostering.  He had been returned 3 or 4 times before he found his home with her.  Sad part to this story, my sister had taken a job in Georgia in June and had been home several times to visit.  Most recently she was home for Christmas.  The day after Christmas she left to go to the airport.  When I went to pick her up, I knew something was wrong.  However, they told me they thought it was his arthritis.  When I called to let Mom know that I had made it back from dropping my sister at the airport in Louisville, she decided we needed to take him to the vet the next morning.  She called me very early and told me that he passed in his sleep that night.  He had just turned 10 in June.  We will never know what really happened, which makes me feel guilty.  Run free Boris, I'm sure there were lots of greyhounds there to welcome you.